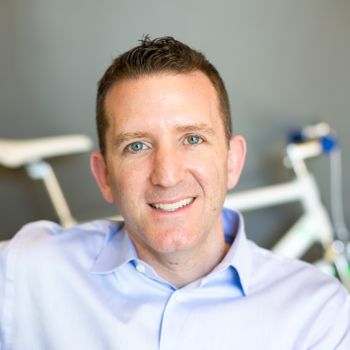 In his role as president and chief executive officer, Doug Ulman oversees the strategic vision and direction of Pelotonia and also serves as an advisor to The Ohio State University Comprehensive Cancer Center – Arthur G. James Cancer Hospital and Solove Research Institute.

Doug is a three-time cancer survivor and globally recognized cancer advocate. After overcoming chondrosarcoma during his sophomore year of college and malignant melanoma twice since, Doug and his family founded the Ulman Cancer Fund for Young Adults, a nonprofit organization dedicated to supporting, educating and connecting young adults, their families and friends, who are affected by cancer. He served as executive director of the organization for four years before joining the LIVESTRONGFoundation in 2001 as director of survivorship. He went on to lead LIVESTRONG as president and chief executive officer for seven years before joining Pelotonia in 2014.

During his time at the LIVESTRONG Foundation, Doug helped transform the nonprofit into an internationally-known brand and leader in the global movement for people affected by cancer. Doug has earned a reputation as the “Most Savvy Health Care Leader in Social Media” for his innovative use of social media to spread awareness and knowledge around the world’s leading cause of death. His online community includes a Twitter following of more than one million.

Doug speaks frequently at some of the nation’s most acclaimed festivals and conferences including the Social Good Summit, the Inc. 500|5000 Conference, the Aspen Ideas Festival, the Clinton Global Initiative University, the RadioShack Business Summit, TedxAustin and SXSW Interactive.

Doug’s outstanding leadership has garnered him both local and national accolades. The Austin Business Journal recognized Doug with a Health Care Hero Award and he hastwice been named to the Non-Profit Times’ Power and Influence Top 50, an honor bestowed to the top 50 nonprofit executives.

Doug currently holds numerous civic and charitable board positions for organizations such as the Union for International Cancer Control, the Ulman Cancer Fund for Young Adults, the Campaign for Tobacco-Free Kids and C-Change. He also sits on the advisory board for Provectus Pharmaceuticals and is an active member of the Young Presidents’ Organization. Doug served for four years as the Chairman of the National Cancer Institute Director’s Consumer Liaison Group.

In his spare time, Doug enjoys traveling, reading, playing golf and running. He has participated in 14 marathons, including a 100-mile ultramarathon in the Himalayan Mountains, and recently climbed Mount Kilimanjaro. Most importantly, Doug enjoys spending time with his wife and two children. Follow him on Twitter at @dougulman